Although there are now multiple generations of the Fortin Family involved in the family business—Y.P.C. Contracting—company founder Paul-Henri Fortin is still engaged in the operation, at the age of 78.

At the age of 78, Paul-Henri Fortin is still getting up at 5 a.m. to check out his harvesting, trucking and service shop operations which are based in the village of St. Prosper, about 120 kilometres southeast of Quebec City.

Fortin’s work career began at the end of his formal schooling when, at the age of 12, he went to work alongside his father on the family farm and woodlot, to support the large family.

“When I was 12, I went to work with my father, with an axe and a horse in the woods. Through my life I have seen a lot of changes in forestry and logging,” he says.

Fortin began working for harvest contractors, and eventually built his own contracting business, Y.P.C. Contracteur Forestier Inc., with skidders and chainsaw crews. When he turned 50 in 1985, with the help of his wife Thelma he expanded into wood brokering, finding markets for wood produced by contractors, most of whom were operating in northern Maine. As a broker, he supplied wood to mills in both Quebec and Maine. Thelma’s responsibilities included handling paperwork and operating their office, and overseeing their home and children. 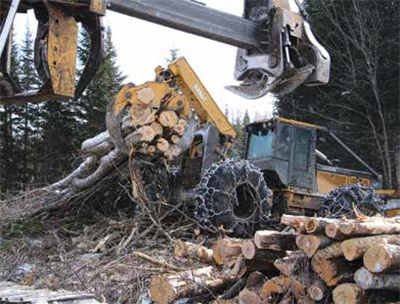 A large portion of the timber produced in northern Maine is processed and sold by mills in southern Quebec and northwestern New Brunswick. A good portion of the Quebec mills situated along the border are either connected to the northern Maine forest road network or have permits which allow oversize loads to be delivered into their woodyards.

Fortin expanded his operations to include buying woodland, and harvesting to supply regional mills, as well as selling land for real estate.

In 1996, he added forest products trucking and mechanized harvesting to the brokering business. In 1998, Y.P.C. constructed a large service shop and office building in St. Prosper. Paul-Henri and Thelma’s son, Michael, joined the business in 1980 and Michael’s brothers Donald and Jacques came on board in 1981.

In 2010, Y.P.C. wrapped up the wood brokering side of the business and focused on contract harvesting and trucking wood, and also built a sizeable highway fleet serving mills and businesses in the Beauce region, making deliveries in Quebec, New Brunswick and Ontario.

There are three mechanics dedicated to forest machines, including on site in the woods, and the Y.P.C. operation includes three large service trucks.

Y.P.C.’s harvest contracting and forest trucking operations are in Maine, with wood deliveries to mills and woodyards along the Maine-Quebec border, in addition to much lesser volume to U.S. mills. Y.P.C.’s annual production is over 120,000 tons.

The Y.P.C. harvest operation consists of three Tigercat feller bunchers, 822, 822C and 822D machines, each with Tigercat felling heads; five Pro Pac delimbers on Cat and John Deere carriers; and their grapple skidder fleet consists of six Deere machines and one Tigercat. Also in the line-up are three loaders mounted on truck chassis and three large service trucks, and a fleet of eight pick-up trucks.

The log trucking fleet consists of seven Western Stars and Kenworths, powered by Cummins and Cat engines. The eight log trailers are Manac, which has a manufacturing headquarters in nearby St. Georges-de-Beauce. Trailers are four and five axle, and a mix of eight- and twelve-foot bunks.

All of the wood produced by Y.P.C. is treelength. Fortin has worked with slashers in the past, but it’s hard to find operators and hard to make money slashing to mill specifications. Y.P.C.’s current business model is delivering treelength to wood yards and mills with the off-road trucks. Fortin contends that the mills and yard operators are very efficient and cost effective at merchandizing treelength to mill specs, and delivering the loads to the mills.

The Y.P.C. harvest and forest trucking operations employ mostly Quebec workers, with only a couple of U.S. citizens in the crew. The Y.P.C. workers are bonded by Y.P.C. to allow them to work in U.S., rather than each having a unique ‘green card’ which allows foreigners to work in the U.S.

Y.P.C. truck drivers are required to cross at designated border crossings where they are checked by both respective border services. Because the border crossings are isolated and see a low volume of traffic, they only have limited hours. 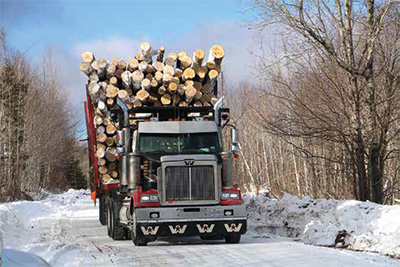 Y.P.C.’s log trucking fleet consists of seven Western Stars and Kenworths, powered by Cummins and Cat engines. The eight log trailers are Manac, which has a manufacturing headquarters in nearby St. Georges-de-Beauce.

To illustrate, Fortin explained the St. Aurelie crossing closes at 5 p.m. “If you don’t get through the border before 5:00, you better be ready to sleep in your truck,” he declared.

The CLP program has resulted in the accident rate in Maine being reduced by half, and as a result CLP operations pay 59 per cent less Worker Comp rates compared to non-certified operations.

“There is a cost for the training, but it gives our employees the knowledge and the skills to do very good work in the operations. They take pride in their training and in the work they do every day,” says Fortin.

Every harvest block has a specific harvest prescription and foresters provide paper maps, in addition to loading digital maps in the bunchers’ GPS units. Forestry staff also delineate and flag wetlands and watercourses in the blocks.

Harvest blocks generally have 1500-foot skidding distances, but that may increase to as much as 2000 feet in certain circumstances.

Harvesting is done during a single 12-hour work shift, with the crew starting at 5 a.m. The crew starts in the woods on Monday morning and head back to their home Thursday evening. Fortin explained that finding and retaining operators and drivers is a challenge, and so he contends that a comfortable camp and good cooks are important for productivity.

The Y.P.C. camp allows operators, off-road truck drivers, mechanics and other operators who work on roadbuilding, maintenance and snowplowing to be on site and ready for the 5 a.m. shift start.

One camp cook arrives to prepare breakfast for the 5 a.m. shift start, as well as preparing mid-day lunches which operators take to the woods. A second cook arrives in the afternoon to prepare the evening meal.

The camp is very neat, clean, and well equipped with cooking and laundry equipment. Fortin was very proud to show off the camp and invited visitors to a fresh muffin and sandwich from the refrigerator prior to seeing the operations.

There are three mechanics dedicated to forest machines, including on site in the woods. The Y.P.C. operation includes three large service trucks.

“Well-equipped service trucks in the woods are very important for our operation. We have the tools, the parts supply and good mechanics, and they keep the machines operating and the operation productive,” says Fortin. “The mechanics work a regular day shift, and stay on the job late if necessary.”

In addition to working on permanent roads and bridges, Y.P.C. also constructs temporary winter roads. Winter road right-of-ways are harvested and wood cleared off, and then get a rough bulldozing and temporary bridges are installed, and then allowed to freeze up. Once the frost is setting in, the road is smoothed off with the road grader to provide good road for winter harvest operations and trucking.

Y.P.C. employs 38 in their harvest, trucking, service and administration operations. In addition to Paul-Henri and Thelma, the management team includes their children Donald, Michael, and Jacques.

Jacques focuses on managing forestry harvesting contracts and operations. Michael concentrates on highway trucking. And Donald manages trucking schedules and hires outside trucks when required, as well as overseeing the service shop.

Paul-Henri and Thelma’s grandchildren are currently finding their places in the business. Marc Antoine and Claudia work in dispatch, Anthony drives off road wood trucks and Jacob is a mechanic in forest operations.

The Y.P.C. service shop employs ten full-time mechanics. The shop works on fleet trucks and trailers, and has serviced other customers since 2010. Paul-Henri shared that they have plans to add a bay with overhead crane capacity to allow them to handle major mechanical work on heavy equipment, including forestry equipment.

Paul-Henri continues to maintain a very busy daily schedule, and is still enthusiastic about participating in the day-to-day operations. He has an easy manner with employees, and they in turn display a deep respect for him. Paul-Henri takes the opportunity to greet each individual employee and introduce them to his visitors. He takes a special pleasure when introducing his grandchildren.

“I believe I have been blessed to have been able to work in the forest,” he says, humbly. “I am very proud of the sensitive harvesting that we do. All our operators work hard to preserve natural regeneration and make sure they stay on skid trails. I am very pleased to see many stands where we have operated in the past growing back with high quality trees that my grandchildren will be able to harvest.”