Blogs – In Hebrew, the word “aron” can mean closet, coffin, or ark (not the Noah one but the one used in our synagogues to house Torah scrolls). Since the ark is a special type of a closet (we store clothes in the latter and Torah scrolls in the former), there really seem to be only two meanings of aron and they are radically different.

The ark, referred to as “aron” in this past Shabbat’s Parashat VaYelech ((Deuteronomy 31:26) contains the most precious possession of the Jewish people (and by extension, the world), i.e., God’s teachings to humanity. The burial coffin referred to when Yosef dies (see the final verse of the book of Genesis) is also referred to as an aron. Here, the box stores one of the most precious possessions of God, the remains of a single individual of his creation, the human being.

In a sense, there is an interesting meld of the two meanings of the aron as, according to a teaching of Rabbi Yosef Soloveitchik, each person is themselves a Torah. The Rav taught that, as a result of learning Torah, we become ever-expanding vessels of Jewish knowledge throughout our lives and that we become a walking Sefer Torah. How fitting then that we, at the end of our lives, are transported to our final resting place in an aron.

This verse jumped off the page of the Chumash as I listened to the baal koreh this past Shabbat. Our outdoor synagogue had been carrying the Torah scrolls from the indoor, main synagogue aron ha-kodesh to laying them down on an outdoor table. What was needed was an aron ha-kodesh for our outdoor services. So I built one for our minyan at the beginning of last week.

Constructed of nearly 80 square feet of ¾ inch sanded plywood with two upper doors and a lower storage area behind a third door, the 6-foot-high, roll-away aron was used for the first time this past Shabbat.

I built this project in my garage behind my home and last Wednesday evening, I asked a friend to help me transport the aron to our outdoor minyan location at the Maimonides School. Together, we were able to slide the 30 by 24 by 72 inch piece into the back of an SUV.

As I slowly drove to the school, I glanced in the rear-view mirror and was temporarily startled. I knew the aron ha-kodesh was behind me, but what I saw was the end of a pine box looking the same as if I were driving a hearse to a cemetery.

I was immediately reminded of my current status as an avel/mourner for my father, Tzemach ben Yosef, hk”m. Simultaneously, I thought of him and his final travel from Brookline to Kvutzat Yavneh this past March in an aron and this aron, built using the skills I learned from him many years ago and about to be used to house our shul’s Torah scrolls. He was a great reservoir of Torah and Jewish experience and taught many people through his decades in the field of informal education through jobs in various Jewish Community Centers in the northeast United States. Most of all, he imparted critical life lessons to his four children in many areas including giving back to the community.

It was thrilling to see the Torah this Shabbat be removed from an aron ha-kodesh rather than just being unwrapped from a tallit covering on a table. 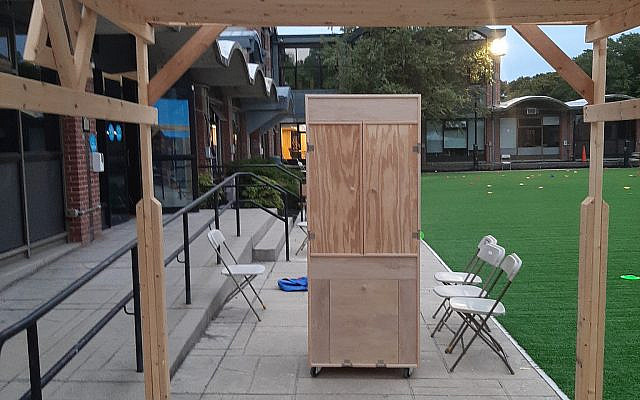 In some small way, this aron represents another way of my expressing my hakarat hatov, my thanks, to my dad for being such a key influence on my life. May his memory be for a blessing.ABOUT THE AUTHORJesse, a Ph.D. chemist/materials scientist, originally from Elizabeth, NJ, recently completed a 35-year career as a technologist at Verizon Communications where he retired as an Associate Fellow. He lives in Brookline, MA , where he attends the Maimonides Kehillah, built and manages the Boston Eruv, teaches a weekly Daf Yomi shiur, serves as the High Holiday Baal Tefilah at Congregation Kadimah Toras-Moshe, and is actively working to complete Semicha through Yeshiva Pirchei Shoshanim. He and his wife, Brenda, are parents to three and grandparents to eleven.