Architecturalrecord – “Quiet” is how the Vancouver-based architect Michael Green describes his recently completed Catalyst building, in Spokane. Because it was largely designed before Eastern Washington University signed on as the anchor tenant, relocating several academic programs there, Catalyst would need to be “aesthetically and programmatically neutral,” says Green. Organized as two wings flanking a central atrium, the five-story mass timber structure has a logical structural grid, open floor plates, and regularly spaced punched windows, he elaborates. 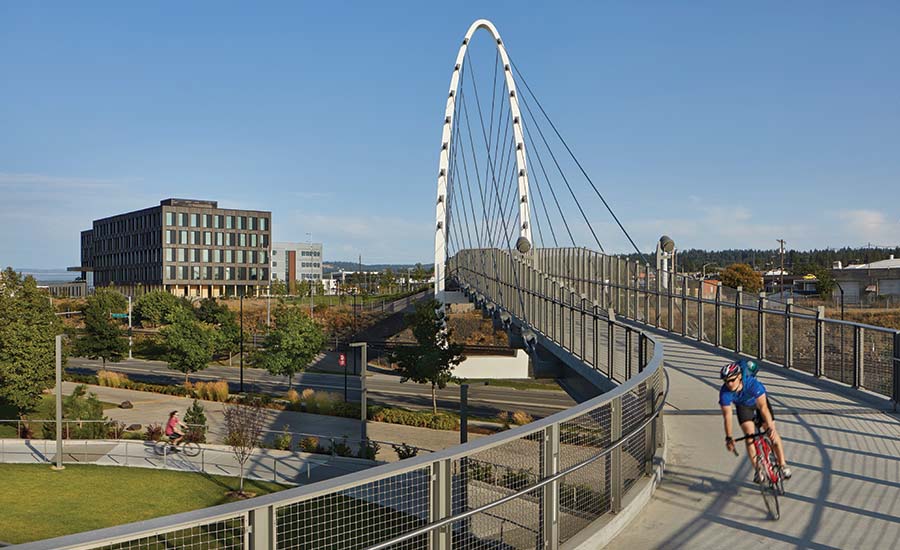 Green’s self-deprecating comments about the handsome though formally straightforward project belie its big ambitions: it is one of the first pieces of Spokane’s South Landing development—an “eco-district” where the buildings will incorporate innovative systems intended to allow them to work together to maximize efficiency and best utilize the electrical grid. At 159,000 square feet, Catalyst—developed by a subsidiary of the energy company Avista and the engineering, construction, and facility-operations firm McKinstry—is one of North America’s largest buildings to pursue both zero energy and zero carbon certification. Achieving this dual certification will mean that, on top of producing enough renewable energy to meet Catalyst’s consumption requirements, the project team has minimized greenhouse gasses emitted during the building’s construction and its operations and then purchased offsets for any emissions that remain.

Catalyst’s principal building material plays a big role in meeting these goals. Designed and built primarily by the construction-tech startup Katerra—it acquired Green’s firm, Michael Green Architecture (MGA), in 2018—the building uses more than 5,000 cubic yards of locally sourced mass timber products. Among these components are the first cross-laminated timber (CLT) panels to be produced by Katerra’s own factory, opened in nearby Spokane Valley last year. By minimizing the use of steel and concrete, which are energy-intensive to manufacture, and instead relying on carbon-storing timber, Catalyst’s structure offsets emissions of heat-trapping greenhouse gases equivalent to taking 1,100 cars off the road for a year, say the project’s partners. 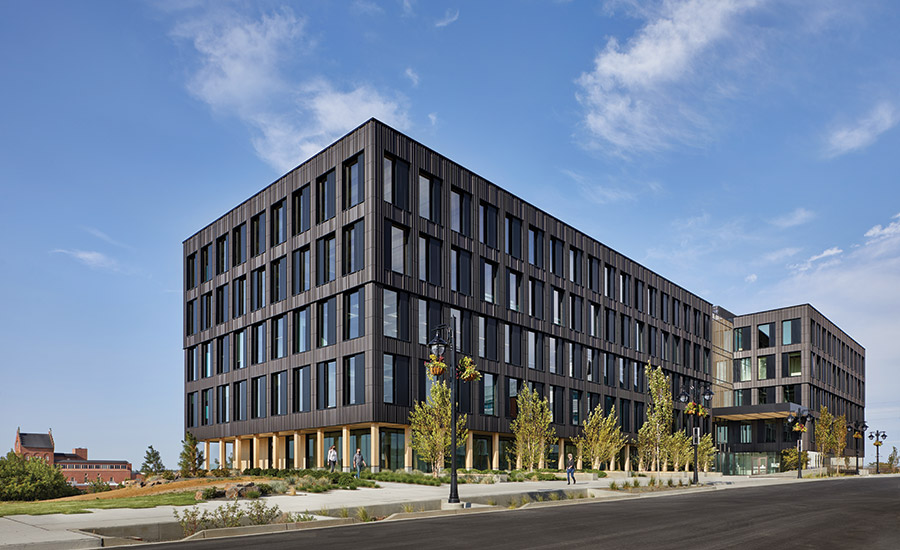 Catalyst (1), is organized around a central atrium (2 & 3). Photos © Benjamin Benschneider 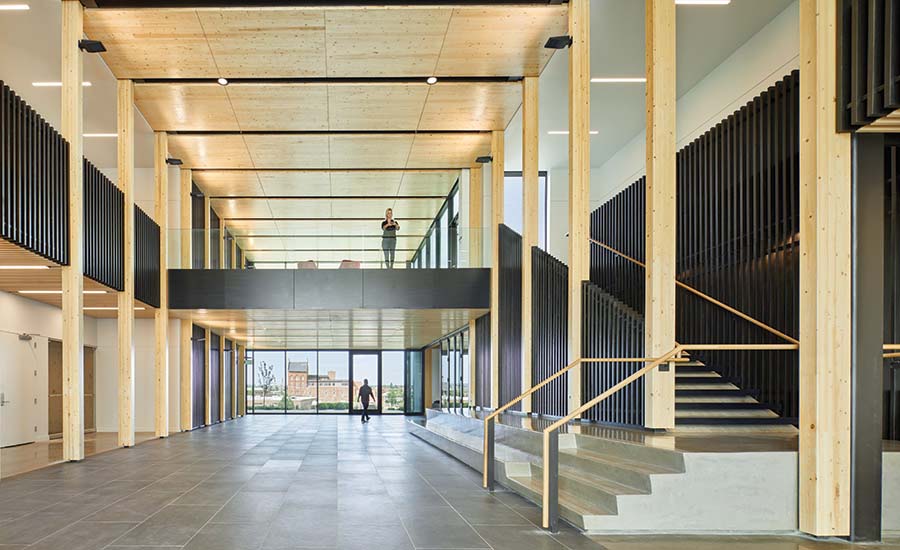 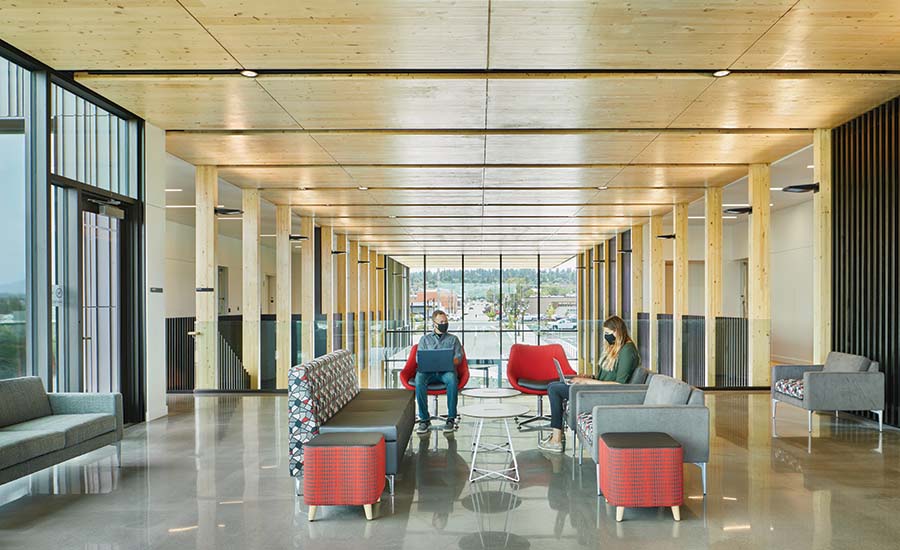 For those acquainted with MGA’s projects, such as the Wood Innovation and Design Centre completed in Prince George, British Columbia, in 2014, many of Catalyst’s components will be familiar. Like the earlier building, Catalyst has a frame of glulam posts and beams, and floor slabs and walls of CLT. Even the lateral-load-resisting structural cores are constructed of mass timber. “Making them out of concrete would slow down construction and negate the climate benefits of using wood,” explains Green. Although it has a topping of gypcrete on each of the floors to dampen the transfer of sound and address vibration, the wood is largely exposed on the interior, as in the earlier project, lending its spaces a warmth and liveliness. 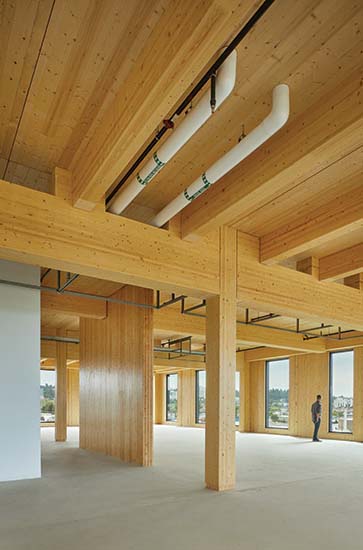 Except for a gypcrete topping on each CLT floor slab, the mass-timber components are left exposed on the building’s interior, lending its spaces a warmth and liveliness. Photo © Benjamin Benschneider

What’s new at Catalyst is the facade. The cladding is a rainscreen system that includes CLT on the interior and charcoal-colored terra-cotta on the exterior, chosen because it mitigates airborne sound (Catalyst is immediately adjacent to an active rail line) and because it has a lower environmental impact than other typical siding materials, such as aluminum. These panels, 30 feet tall and 12 feet wide (a dimension determined by transportation limitations), were assembled off-site and lifted into place on the building frame by crane. The outcome is a highly insulated and airtight envelope—one that exceeds the stringent Passive House standard by factor of 2. The results of its blower door test—an assessment that determines air-infiltration rates—were “off the charts,” says Green.

The sophisticated enclosure helps reduce energy use. But the building’s infrastructure is also critical. Catalyst depends on an all-electric, district-wide heating and cooling plant housed in an adjacent building. McKinstry designed and will operate the system, which includes such technologies as heat recovery, on- and off-site renewable-energy generation, and thermal and battery storage. Engineers used a proprietary parametric tool to determine the most appropriate components, their optimal size, and best configuration. All in all, they modeled 40,000 different combinations, aiming to achieve the greatest efficiency at the lowest cost.

A 213 kW photovoltaic (PV) array on the building’s roof, in addition to PVs installed on three other rooftops elsewhere in Spokane, will generate 1,100,000 kWh of electricity per year, an amount that is expected to more than fully offset the building’s energy use. Meanwhile, within the building, thousands of sensors will track ambient conditions, air quality, and occupancy, among other attributes. This real-time information from Catalyst, and from the its planned eco-district neighbors, will allow facility managers to balance energy demand, generation, and storage, to control not only how much power the buildings draw from the electrical grid, but when, explains Scott Morris, Avista chairman. “The times of highest demand coincide with the times of highest carbon emissions,” adds Brad Liljequist, McKinstry’s zero energy senior program manager.

Officially earning zero energy and zero carbon status will involve tracking performance for 12 months once the building is fully occupied. The university is in the midst of gradually moving into Catalyst, with programs as diverse as electrical engineering, computer science, public health, business, and creative writing, though the process has been slowed by the pandemic. But the development partners say they are on target to meet their environmental goals, even if actual certification is still a way off. The project’s significance goes beyond its certification status: for Liljequist, the real potential lies in the treatment of Catalyst, the surrounding eco-district, and the grid as one ecosystem rather than separate entities. “We should be able to operate at levels that weren’t possible before,” he says.